Who puts the Boom in Boom Kitchen? 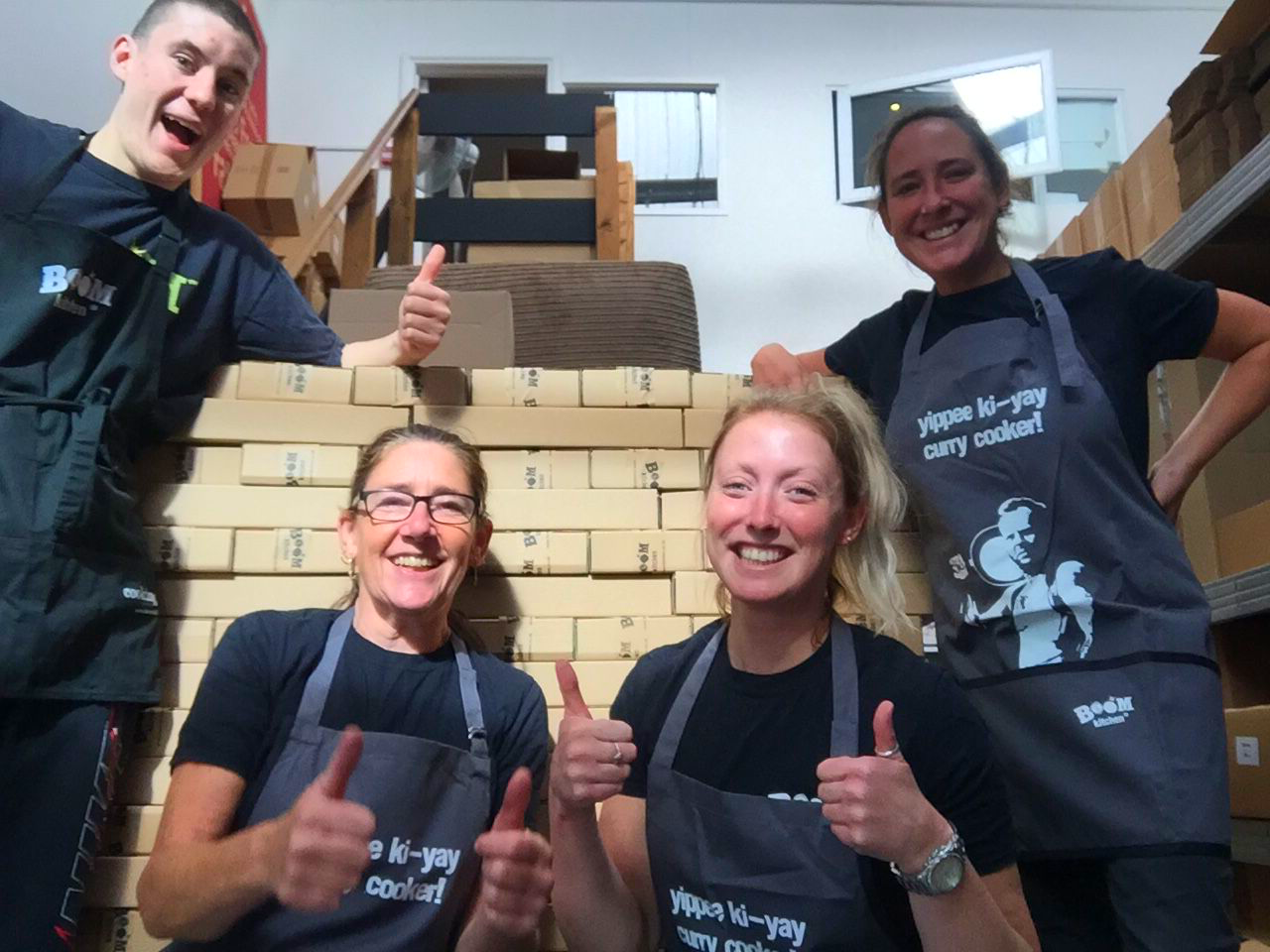 Boom Kitchen has been a supporter and partner of Frank Water for years.

Devon based, the small team create the most delicious spice packs to cook your favourite curries from scratch. 10p from each Karma Korma pack is donated to Frank Water.

Lizzie, our Corporate Partnerships Executive, went to visit the team. She sat down with them to find out about the history of their business and what inspires them.

So lovely to meet you! Tell us about the Boom Kitchen team.

We’re a small team of four that can double in size for busy periods (i.e. the team doubles in size not the team members, although we do put on some timber when minced pies hit the shops).

Maggie is Boom’s powerhouse. She keeps our spices stocked and our orders flowing. She runs a tidy ship where everything has its place which is useful. When you consider we have over 70 unique ingredients and packaging components that make up our curry kits. If you ever come and visit she’ll lay on the tea and biscuits but won’t let you go up or down stairs without carrying something.

Carl is our recipes man. All our recipes originate from his backpacking days when he used to travel and collect his favourite recipes. He had to really turn on the charm to get cooks to part with some of their recipes.

Claire is to thank for our amazing packaging. She also works as a freelance brand and food packaging designer. So if you want some of her magic design sauce get in touch!

Jim is a jack of all trades and master of none. His favourite recipe is Boom’s Lady Naga vindaloo. His finely tuned hiccup reflex (triggered by spicy food) comes in useful when we’re testing chillies and spice blends.

This sounds like the dream team! What made you decide to start Boom Kitchen?

Carl was knocking up curries that beat the pants off our local takeaway. Jim wanted the recipes but soon learned his spice rack was severely lacking. Even after a £40 spice haul in his local supermarket he couldn’t get his hands on some of the ingredients he needed. Things like black cardamom and mango powder! Jim thought there had to be an easier way for an amateur like him to scratch cook. Carl was thinking the same thing and Boom was born.

How interesting! Where do you get inspiration from for your recipes and packs?

All our inspiration comes from travel and the dishes we’ve enjoyed around the world.

In terms of our packs we made a conscious decision to give our recipes a personality instead of talking about ourselves. Most curry brands tend to have a person behind them with serious curry credentials and deserving of mad curry props. They probably grew up in the shadow of a parent grinding spices, owned a mortar and pestle before they could walk and have a catalogue of authentic recipes. In contrast we are a couple of dudes who grew up on Findus crispy pancakes and takeaways from curry houses across Luton and the Midlands – it’s not the most inspiring story. There’s also a fine line between collecting recipes on your travels and stealing them.

We’re about to launch a recipe that Carl begged from a café cook in Indonesia 28 years ago. What inspires us is the idea that we can give a recipe we love its own identity and that other people out there might discover it and get as much enjoyment from it as we do. The new packaging is going to feature the endangered Mynah bird endemic to Bali. Claire noticed it has really distinctive markings around its eyes that makes it look like it’s wearing eye shadow. She took this theme and flew with it (boom boom) so it now has a fullblown David Bowie lightning bolt. It’s pretty cool and we can’t wait to see printed on the new packs.

What’s your favourite pack and why?

Probably our Tikka Tarka Masala because it features an old Devon Dad joke, “like a Tikka but a little Otter” from Henry Williamson’s Tarka the Otter that is set on our doorstep here in Braunton, North Devon. We also love all the celebrity Otters on the side of the pack that were drawn by a local illustrator called Jose Walker (@josewalkerr on Instagram).

We have tried the Tikka Masala after a long cycle ride along the Tarka trail and confirm it’s delicious! What encouraged Boom Kitchen to support Frank Water?

We always wanted to give something back so when we came up with the idea of having a “Karma Korma” kit we Googled it and found Frank Water were running Karma Korma charity curry nights. We contacted Frank and explained we really wanted to call our kit Karma Korma and would love to support them too. So it was really a happy accident that we found Frank – a great charity that also helps the country that gave the world our favourite dish! 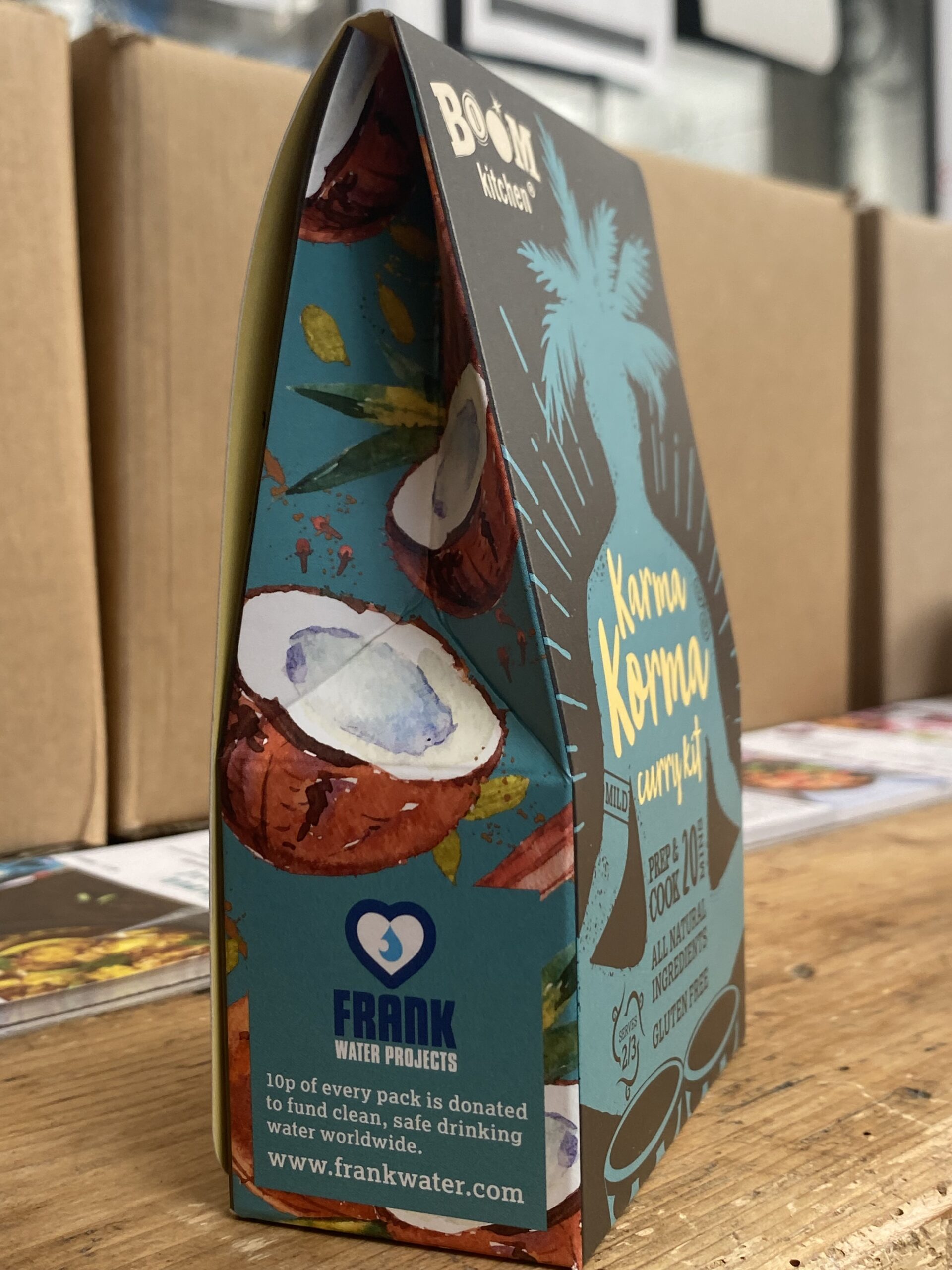 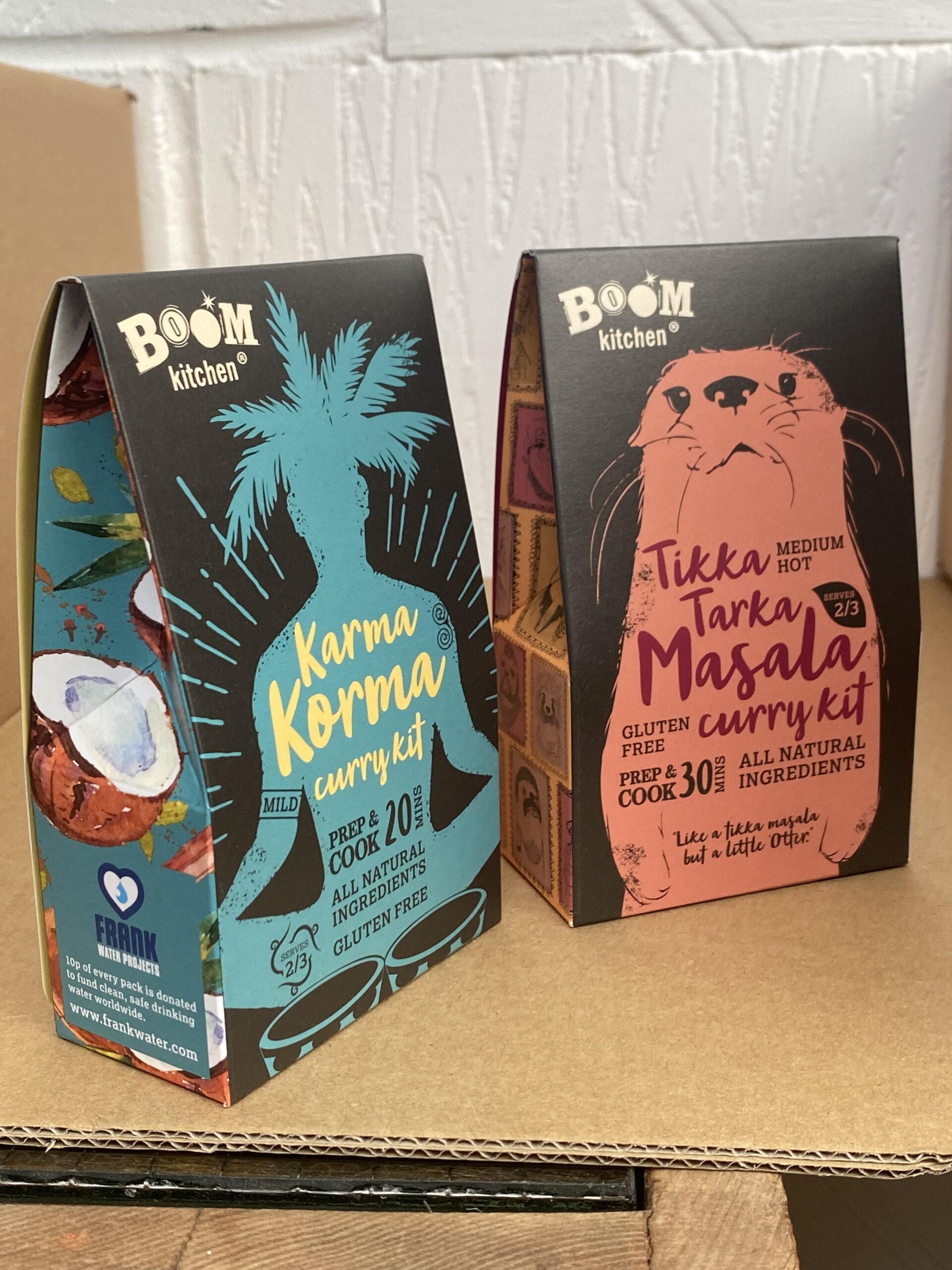 What a coincidence. It was meant to be! Can you tell us where you get your spices from?

Sadly we can’t get everything we need in Devon so we import from all over the world. Spices are a global commodity and you really get what you pay for. The more you learn about spices the more you realise there is to learn. For example; why machine dried cloves cost more than sun dried cloves and end up a completely different colour! We only source the highest grade ingredients. Sometimes they come from India and Sri Lanka, sometimes they come from South America. Maggie does an excellent job grading all our spices to ensure our kits are as uniform as they can be no matter where the spices come from.

We visited Sri Lanka in April 2022 and are hoping to partner with a local company there for our whole spices and coconut. It would be nice to set something up over there – even if it just means we have an excuse to visit more. It’s a beautiful country, the people are so welcoming, and you can have egg hoppers and curry for breakfast which takes some beating.

You mentioned earlier that Boom Kitchen will be launching a new recipe pack soon. Take it from me who’s stayed at Poppies Gang, that is a legendary place with incredible food. Tell us more!

We have a new Indonesian Beef Rendang recipe coming out in the next month or so. We’ve never been good at launching recipes on time, I think we forget how much work it takes – it’s super close though. It’s called Poppies Gang and it’s our tribute to the winding, bustling alleyways of Kuta (alleyways are called gangs). If you Google “Kuta in Bali” you’ll get results for, “why Kuta is the worst place in Bali!” Carl was there in ‘94 so the place has clearly changed a bit. We think it’s kind of cool that the place is now considered to be a bit naff. Places may change but a good recipe is a good recipe forever.

What’s been your biggest highlight of your Boom Kitchen journey so far?

Maybe moving out of Carl’s lean to where it all began with a 12 tray food dehydrator and into our shiny unit – that was a special moment.

Winning Best Curry Kit producer by The Independent newspaper was pretty cool too. We sent some samples off for a piece they were doing. We had no idea they were doing stringent testing and comparisons of all the curry kits on the market so we were thrilled when we came out on top.

Another highlight is seeing the money we donate to Frank go towards lifechanging work, that’s far more important than what we do and we’re so proud to be able to help – even if it’s only a little.

How amazing! Where do you envision Boom Kitchen to be in five years time?

Hopefully we’ll have a few more recipe kits in the range and maybe some curry sides. Most of our customers subscribe to monthly deliveries so our focus is going to be keeping our delivery boxes interesting.

Our final question. Is there anywhere in the world you haven’t travelled to that you’d love to visit? If so, where?

Claire: Philippines for remoteness, island hopping and the people. South America to experience the food.

Maggie: Scotland to see the lakes.

Boom Kitchen are releasing their new Indonesian Beef Rendang called Poppies Gang at the end of August. Be sure to keep a look out on their website and social media. 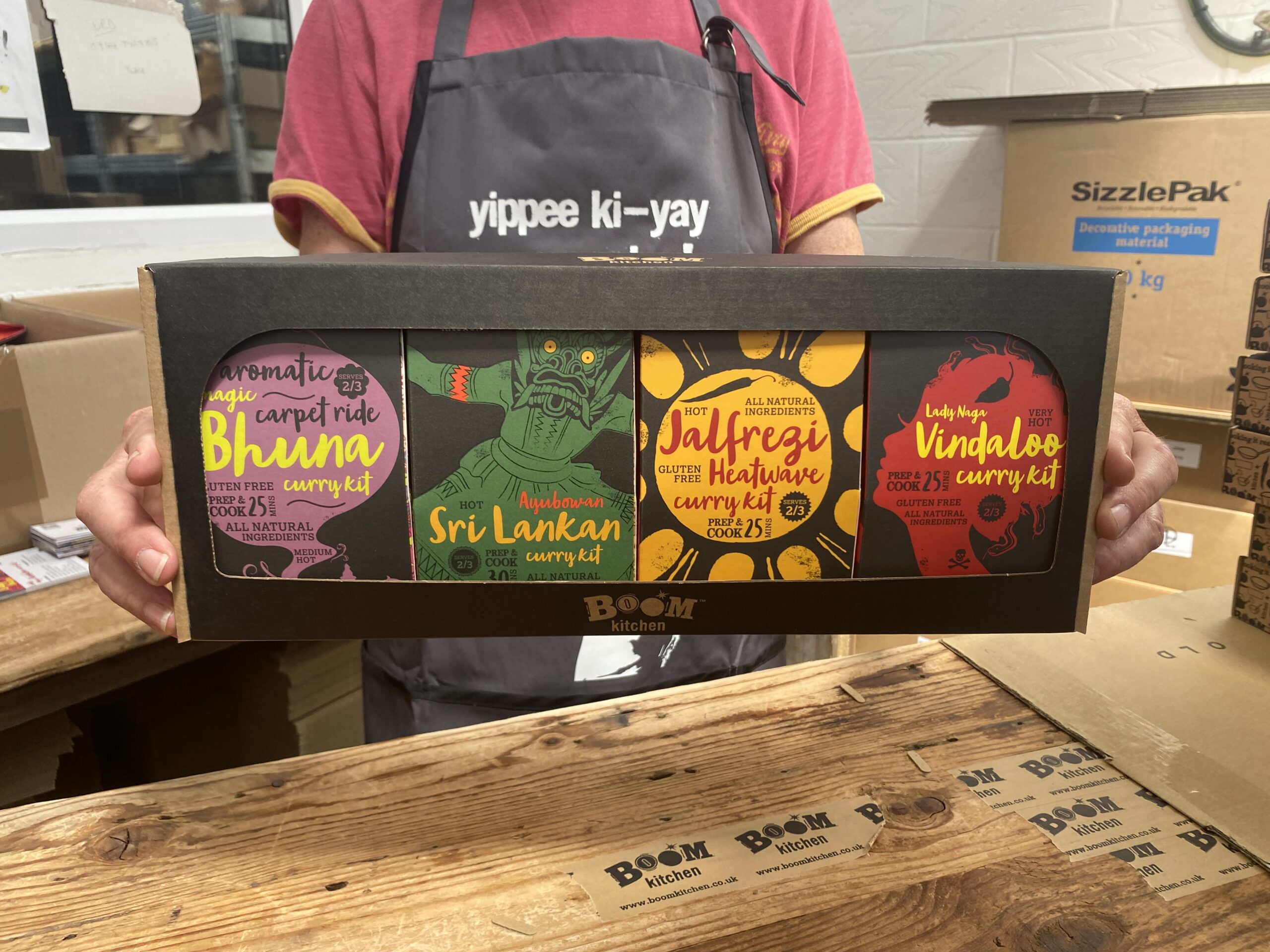 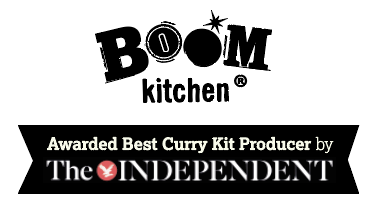