As we approach the Glasgow Conference of Parties (COP), the trail of climate change meetings and promises reads like a gap year student’s round the world trip and sometimes it feels like these meetings alone are causing irreversible climate change.

The most significant stops so far have been Copenhagen (2009) where developed countries promised US$ 100 billion per year for climate change action from 2020 and Paris (2015) where those same governments committed to keep the world’s average temperature rising no more than 2 degrees from pre-industrial levels.

But the globe trotting and the vague promises must end soon – the gap year is coming to an end and it’s time to “grow up” as Boris Johnson says.

“The next 10 years will be absolutely crucial in determining what kind of world will exist in the decades beyond. If we act decisively, and innovate and invest wisely, we could both avoid the worst impacts of climate change and successfully achieve the sustainable development goals, as the IPCC report emphasises. If we do not, we face a world in which it will become increasingly difficult for us and future generations to thrive.”

However, as I’m sure you assumed, it is not all that simple.

Firstly, although governments have pledged almost 80% of the US$100 billion per year, much of that funding is not simply developed governments financing climate change adaptation in developing countries. Instead, it’s a mixture of loans, export credits, private finance, bilateral and multilateral public financing.

This means it’s hard to actually assess if the US$ 100 billion target has actually been met and, even if it has, how much it will simply be re-creating the debt crisis that many developing countries had to endure in the 1990’s.

Secondly, how much of this US$ 100 billion will go towards Sustainable Development Goal (SDG) 6 – water and sanitation which the UN itself has stated is “at the core of sustainable development and is critical for socio-economic development, healthy ecosystems and for human survival itself?”

In 2018, the last year with available data, only 8.7% of all climate funding went to projects helping communities withstand water stresses. Less than 1 %, meanwhile, was spent on helping the world’s poorest people access water and sanitation. The World Health Organisation calculates that a further $11.3bn (£7.9bn) per year is needed, on top of current investments.

Thirdly, once the funds are raised, the global WASH sector itself has some fundamental changes to make if it is to reach those left behind by current spending on taps and toilets.

A recent research paper commented that “without addressing foundational issues in the (water) sector, any finance mechanism, whether public, private or blended, will be a short-term, band-aid solution and the sector will continue the cycle of dependency on external assistance.” 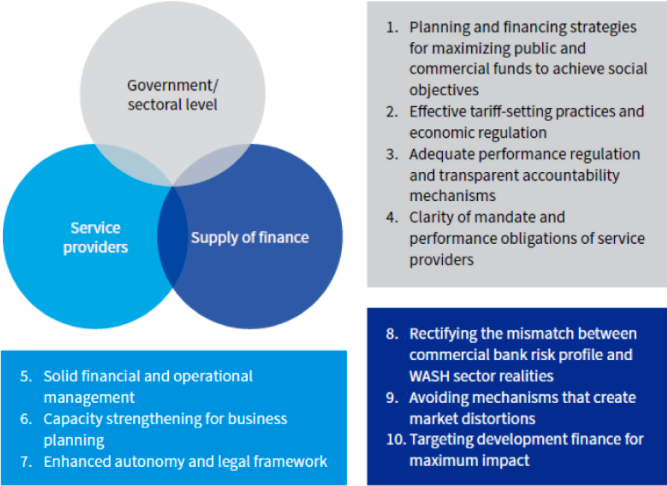 These 10 ‘foundational areas’ (picture above) demonstrate the long road that we still have to travel if we are to make sustainable progress on improving water management into the foreseeable future.

So, let’s be realistic about the progress at these meetings whilst being fair and open minded about the facts.

Although there is a lot that we can do as individuals, if we are to tackle the climate change crisis and the water crisis, we need governments to step up. How?

By supporting organisations like Frank Water that are implementing climate change adaptation projects and funding the water infrastructure plans that we build with communities so that we make water availBy engaging on a global level. Meetings like COP are crucial to holding the world’s decision makers to account. There are just a handful of countries (Iran, Turkey, Eritrea, Iraq, South Sudan, Libya and Yemen) – that have not signed the Paris agreement. Now is the time for the rest of the world’s governments, particularly, developed country governments like ours, to take a lead.able into the future – even a future where the world is hotter than it is today.

By listening to people on the ground. Local advocacy is just as important and effective. In the Indian state of Chhattisgarh, we have leveraged more than £1m from local government to fund infrastructure and other works that will ensure some of the poorest people in the world are more resilient to the challenges that climate change will inevitably pose.

Let’s hope that COP26 is the start of us acting to save our planet and the planet of future generations.